Use my location
Back
Beginnings of SDN Beranga
SDN History

SDN Children’s Services begins in 1905
In 1905 a determined group of women from Sydney’s affluent suburbs who understood ‘the difficulties that beset the paths of working mothers’ founded the Sydney Day Nursery Association (now SDN Children’s Services). The Association aimed to improve the welfare of children whose mothers were facing poverty and had to work to provide for their family. Infant mortality was high and the Kindergarten Union was only able to provide day care services for a few hours a day. With no other option, these young children were often left to fend for themselves among the streets of working class Sydney.

In response, the Association opened its first Day Nursery in a terrace house in Dowling Street, Woolloomooloo in 1905—the first long day care centre in New South Wales. For just three pence a day, babies and children were bathed, fed, clothed and cared for from 7.00am to 6.30pm.

Due to overwhelming demand, the Association opened day nurseries in more locations across inner-Sydney soon after— all in areas of need, with large working populations.

SDN’s disability services
From its earliest days, SDN provided professional, holistic services for children. At our first nurseries, children were cared for by qualified nursing staff, and provided with nutritious meals and access to free medical assessments.

Early to recognise that improved social conditions are as important for children as physical care, SDN was also at the forefront in the employment of welfare and allied health professionals.

SDN Beranga is announced
In 2010, SDN successfully tendered to build and operate the first Autism-specific Early Years Demonstration Service in Western Sydney. The service would be known as SDN Beranga.

The innovative service delivery model, funded by the NSW Government, would significantly improve outcomes for children on the Autism Spectrum, and their families.

A ‘lighthouse’ centre would be built, which would provide outreach services to Greater Western Sydney early childhood education and care ‘satellite’ centres.

By using innovative and best practices in early childhood intervention, SDN Beranga would support families raising children who are on the Autism Spectrum

SDN Beranga begins
In August 2011, a transitional SDN Beranga program was introduced for families. The program was run from local community centres, including the Mt Druitt Aboriginal Child and Family Centre, where many important and lasting connections were formed.

In January 2012, construction of the ‘lighthouse’ centre building began on vacant land purchased by SDN in Rooty Hill, Western Sydney. Established in the early-1800s, Rooty Hill is now a busy residential and business suburb with a diverse population [1].

The ‘Lighthouse’ opens
After several delays caused by rain, construction on the SDN Beranga ‘Lighthouse’ (the purpose-built, specialised centre for children on the Autism Spectrum and their families) was completed almost a year after commencing. Educators and staff welcomed children into the centre on 21 January 2013.

The building was officially opened on 22 June 2013. Following a Welcome to Country performed by Darug Elder Aunty Jacinta, over 100 guests enjoyed the celebration.

In attendance were SDN Beranga families, SDN Board and staff members, satellite staff members, the NSW Premier and Minister for Ageing and Disability Services, local MPs, and NSW Government representatives.

In her opening speech, (then) SDN President Theresa Collignon acknowledged the benefits of quality, tailored, trans-disccplinary early childhood education and care for children on the Autism Spectrum.

“… and now [since coming to SDN Beranga] she is laughing and playing.” SDN Beranga parent, 2013

The importance of place
A mural in SDN Beranga’s outdoor play area, by Darug artist Leanne Tobin, was unveiled in 2014. The mural informs the service’s education program, and facilitates reflection on the importance of connection to country and builds relationships with SDN Beranga families. 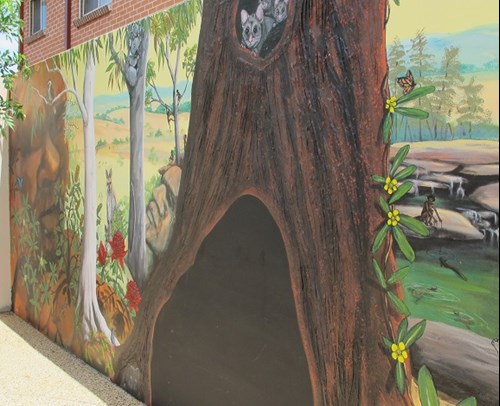 Since 2011,the ’Lighthouse’ and ’satellites’, working in tandem, have enabled hundreds of children to transition from highly specialised services to mainstream centres and schools when the children, and their families, are ready.

Children attending SDN Beranga have demonstrated an increased level of social interaction, communication and play. SDN Beranga families have also developed sustained relationships and support networks. SDN continues to work in partnership with all levels of stake-holders to secure the long term future of SDN Beranga, and to promote and build on this innovative service delivery model.

“… I can’t believe it, this is so wonderful.” SDN Beranga parent, seeing their child sitting happily at a table, eating with others, 2013

SDN today
For more than 110 years, SDN has been committed to addressing social inequalities, improving children’s quality of life and enhancing the life chances of all children.

[1] SDN Children’s Services acknowledges the traditional owners of the land.