Use my location
Back
Beginnings of SDN Woolloomooloo
SDN History

‘Woolloomooloo is a very centre of working women, to whom a Nursery is an absolute necessity… ’ Sydney Day Nursery Association Annual Report 1917-18

Woolloomooloo's past
The traditional owners of the land are the Gadigal people of the Eora nation [1]. A steep valley circling a bay, the name ‘Woolloomooloo’ was thought to have been adapted from an Aboriginal word. The area was of ceremonial importance to the Aboriginal owners.

Woollamoola House, built 1793, was the home of John Palmer, the early colonial commissary in charge of supplies and accounts. Palmer developed the area as farmland, known as Woolloomooloo Farm. Woolloomooloo became a fashionable area with large houses until the mid 1800s, when the lower area was subdivided in 1840 and the wharf constructed by 1866. Small houses and pubs for maritime workers lined the streets near the wharf, and shipping and fishing became important industries. By the late 1800s, crowded Woolloomooloo was known for cheap rents and run-down housing. 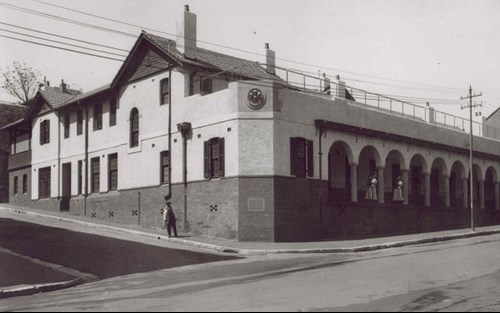 SDN's day nurseries in Woolloomooloo
SDN’s first day nursery at 126 Dowling Street, Woollomooloo, quickly ran out of space and moved to Darlington in 1908. The continued need for child care for poor working mothers in Woolloomooloo meant that in 1909, SDN’s second day nursery opened there in Brougham Street. By 1919, the Brougham Street building had deteriorated to the point that a ceiling collapsed ‘narrowly escaping a child’. The nursery moved temporarily to the ANZAC buffet in the Domain, but a new permanent home in Woolloomooloo was needed.

At the same time, the NSW Government was looking for solutions to the poor health of children under five in NSW. The Royal Society for the Welfare of Mothers and Babies (later known as Tresillian), a voluntary organisation supported by the NSW Government, was formed. They proposed integrated maternal and childhood welfare centres to coordinate services in the one place, thereby improving access for mothers and their children.

The Royal Society, the Sydney Day Nursery Association and other organisations collaborated to open a welfare centre in Wolloomoolloo. The foundation stone was laid on 3 June 1920 by John ‘Greg’ McGirr, NSW’s Minister for Public Health and Motherhood. The brick and roughcast building was designed by Government Architect George McRae, who also designed many buildings in Sydney including the Queen Victoria Building. 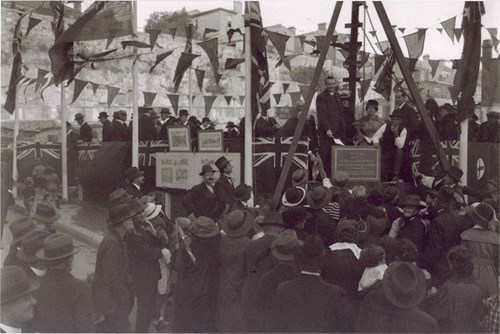 Laying of the first stone for the construction of the Welfare Centre for Mothers and Babies building, now home to SDN Woolloomoolloo, 3 June 1920. Image source: SDN Archive

The Welfare Centre for Mothers and Babies opens in 1921
The Welfare Centre was officially opened on 27 October 1921. The ceremony was held in the upstairs open air playground and attended by government members, dignitaries (including the Consul-General for France), doctors, welfare workers and other interested persons.

‘By keeping the mothers well and happy and thus ensuring that their babies are well and happy, we shall avoid, if possible, treating them when they are sick.’ Hon. J.J.G. McGirr, Minister for Public Health and Motherhood, opening the welfare centre on 27 October 1921, The Sydney Morning Herald, 30 October 1921

The site’s layout on a large block of sloping land allowed each organisation to use different entrances. SDN’s day nursery was entered from Dowling Street and contained a children’s sleeping room, toddlers’ play room, a babies’ room and an ‘isolation room’ where children with suspected infectious illnesses could be treated separately. Children often ate and slept in the fresh air on the balconies, while the upstairs level provided a large safe outdoor playing area, along with our staff’s living accommodations.

The day nursery relied heavily on philanthropic and in-kind support. The large commercial laundry next door washed the children’s clothes for free and in 1930, money from fundraising meant the walls could be painted bright colours. 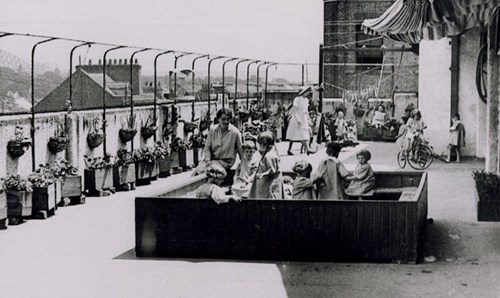 Nursery Schools begin
After a need was identified for an education program for children over two-years-old in a long day care setting, SDN opened NSW’s first nursery school in 1931 and training centre for nursery school teachers in 1932, both in the Woolloomooloo Day Nursery building. This was an innovative approach by SDN, recognising the importance of early childhood education.

SDN Woolloomooloo today
Since its beginnings as an integrated ‘welfare centre’, SDN Woolloomooloo has undergone many changes, reflecting a strong connection with our families within a vibrant and diverse community. 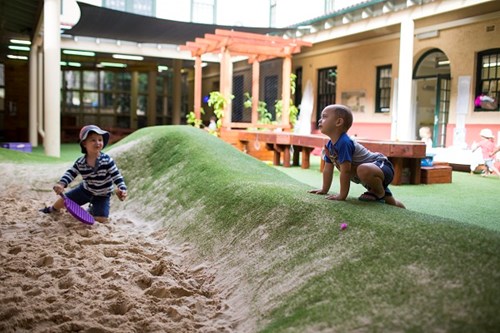 The SDN Archive, established in 2002, is a unique resource in Australia’s early childhood education sector. You can see SDN Archive on HistoryPin.