Use my location
Back
Beginnings of SDN Mosman
SDN History

‘This consciousness has made everyone realise that to obtain the best results, the work must begin during the pre-school years of the child ...’ Sydney Day Nursery and Nursery Schools Association Annual Report 1941-42

History of Mosman
The traditional owners of the area now known as Mosman are the Kuringgai people. [1].

The area was named after Archibald Mosman, who along with his twin brother was granted land in the area in 1831 and then established a whaling station at Mosman Bay.

The landscape was beautiful but very rugged and mostly inaccessible, crossed with foot tracks. The first proper road, Avenue Road, was not built until 1860.

In the late 1800s, the Harnett family developed the area with roads, a sandstone quarry, horse drawn bus services and ferry links to the city, which allowed visitors to enjoy picnic resorts on the foreshore. In 1893 the Municipality of Mosman was formed.

By the 1900s, Mosman was home to large federation style houses and an increasing population of artists and professionals who were drawn to the natural beauty of the area.

It is interesting to note that a long-time artistic resident of Mosman, Marianne Seemann, was the art lecturer at SDN’s Nursery School Teachers' College from 1945 until 1950.

SDN plans a Nursery School in Mosman
The first Nursery Schools in New South Wales were established in 1931 by the Sydney Day Nursery Association. These new Nursery Schools provided an educational program for children aged 2 to 5 years in a long day care setting.

Drawing on methods by UK Nursery School pioneers Margaret and Rachel McMillan, the Association focused primarily on opening Nursery Schools during the 1930s and 40s, as opposed to Day Nurseries.

During the Second World War, the need for the Association’s Day Nurseries and Nursery Schools became urgent as more women took up work and for longer hours.

The Association’s 1941/42 Annual Report observed that, “The problems of a country at war are reflected in the Nurseries where every branch is filled to capacity and each has a long waiting list.”

To meet this demand, the Association forged ahead with Nursery Schools where children benefitted from a ‘sound education based on modern research in child development and child guidance’.

Many councils supported the addition of Nursery Schools in their localities. To this end, Mosman Municipal Council gladly provided £100 towards establishing the Nursery School.

By 1943, the Association had purchased a residential house named ‘Benhilton’ at 33 Brierley Street in Cremorne (later Mosman) originally owned by Captain Gerard Smith. Many alterations were carried out to make it suitable as a Nursery School.

Fundraising and preparing equipment were important tasks before the Nursery School could open. One of the activities organised in 1944 was a sewing bee to make bibs, face washers, towels and blankets for the little ones. Mosman Council also helped plant a garden of roses, shrubs, palms and small trees.

Demand for the Mosman Nursery School was evident, with over 80 applications received in 1943 which far exceeded the number of places able to be offered! 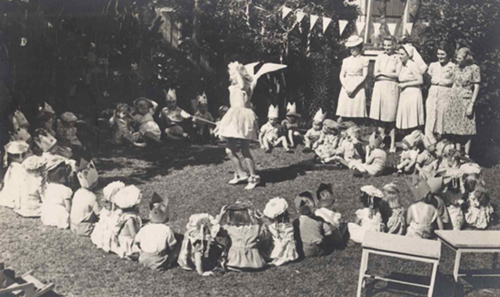 SDN Mosman opens in 1944!
Mosman Nursery School was officially opened by Lady Gowrie on 19 May 1944. A local child presented flowers to the Association’s President, Donalda McElhone, while the Mayor of Mosman and Council officials looked on during the ceremony.

There were 40 children attending the Mosman Nursery School in the first year, and a long waiting list.

Important fundraising continued, with the Mosman Nursery School Committee setting up a stall during the Association's Nursery Week fundraiser held in Hyde Park in 1945.

Parents’ Clubs were formed to raise funds and make repairs to the building, garden and toys, and to install a concrete path. Fêtes and bridge parties were a popular fundraising activity at the time.

The Nursery School endeavored to provide holistic education and care for the children. Along with activities to develop the mind, the children were weighed periodically at Mosman Clinic and received dental care at the Association's Northern Suburbs Nursery at Crows Nest. 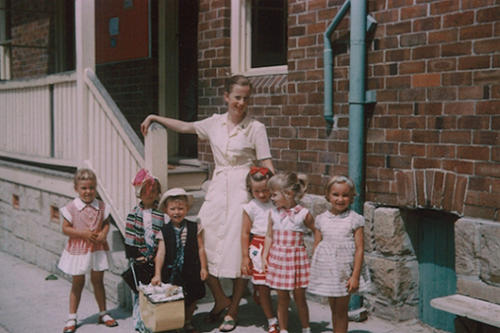 SDN Mosman today
Since its beginnings, SDN Mosman has undergone many changes, reflecting a strong connection with our families within a vibrant and diverse community. 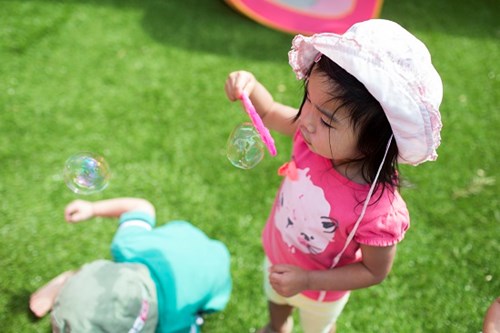 SDN Children’s Services runs more than 20 children’s education and care centres throughout NSW and the ACT, as well as providing a range of children and family support programs.