Use my location
Back
Beginnings of SDN Riverwood
SDN History

‘… we opened a Nursery School at Herne Bay Community Settlement in a building provided for that purpose by the Housing Commission and we feel that this school… has provided a very necessary service’. Sydney Day Nursery and Nursery Schools Association Annual Report 1946-47

SDN Children's Services begins in 1905
In 1905 a determined group of women from Sydney’s upper classes who understood ‘the difficulties that beset the paths of working mothers’ founded the Sydney Day Nursery Association (now SDN Children’s Services). The Association aimed to improve the welfare of children whose mothers were facing poverty and had to work to provide for their family. Infant mortality was high and the Kindergarten Union was only able to provide daycare services for a few hours a day. With no other option, these young children were often left to fend for themselves among the streets of working class Sydney.

In response, the Association opened its first Day Nursery in a terrace house in Dowling Street, Woolloomooloo in 1905, the first long daycare centre in NSW. For just three pence a day, babies and children were bathed, fed, clothed and cared for from 7.00am to 6.30pm.

Due to overwhelming demand, the Association opened Day Nurseries in other locations in the inner city soon after. These were all areas of need in Sydney with large working populations.

History of Riverwood
The traditional owners of the area are the Bediagal people [1].

The first European settlement started in 1810 when land grants were issued. The land was used for market gardens and forestry.

The area around Salt Pan Creek, which flows to reach the Georges River, had long been a site of refuge and uprising by Aboriginal Australians. Camps in the area in the 1920s and 1930s became an important meeting and focal point for Indigenous rights and resistance in NSW.

Before the suburb was called Riverwood, it was known as Herne Bay, after a town in England. In 1931, the Herne Bay railway station on the East Hills line was opened.

During World War II, the United States Army established the largest military hospital barracks in Australia at Herne Bay, on a 236-acre block. Staffed by doctors and nurses from the John Hopkins University Hospital in America, the 118th General Hospital was made up of 490 wooden huts. The U.S. Army left at the end of the war in 1945, and the site was used by the Royal Navy and Australian Army.

By March 1946, the site was passed on to the NSW Housing Commission to temporarily ease the shortage of postwar housing. The site became the Herne Bay Housing Settlement. It contained 259 of the remaining wooden army huts, mostly 20 x 100 feet, converted into one to four room units for families. Laundry facilities were shared between four families. Poor living conditions, poverty and overcrowding were common. 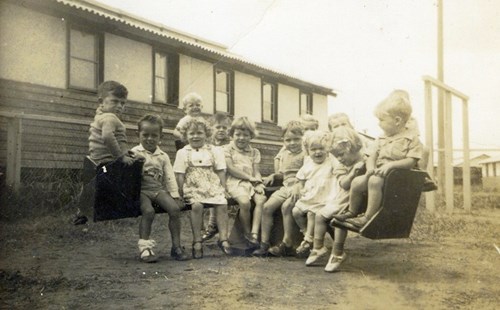 SDN plans a Nursery School in Herne Bay
The Housing Commission recognised that many services were needed by the community, including a nursery school.

The Nursery School provided much needed medical care, nutrition advice, and a hot meal every day. A trained nurse was employed to assess children on enrolment to the Nursery School. A doctor from the Department of Health and a Red Cross nurse visited regularly, which meant that “all children have gained weight, eat well, sleep well and are very happy”.

Unlike the Association’s other day nurseries and nursery schools, there was no committee to run Herne Bay Nursery School at first. However, a Mothers’ Club was formed, providing support for the families and an opportunity to contribute to the Nursery School.

The Herne Bay Nursery School had to overcome challenges that were unique to the new Housing Commission area due to the lack of facilities, overcrowding and unemployment. The Nursery School provided a service that understood these challenges and was very much valued by the community. 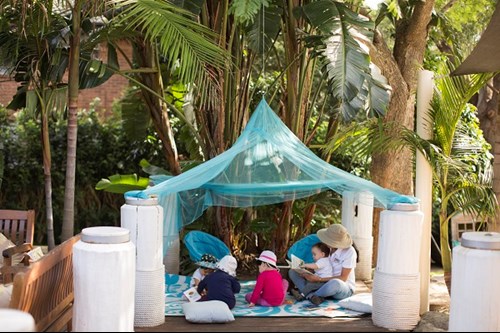 Changing to Riverwood
In 1957, a competition was held to change the name of the suburb from Herne Bay, and the winning name was Riverwood. Herne Bay Nursery School still kept its name until 1960, when it became Riverwood Housing Settlement Nursery School.

By the early 1960s, most of the temporary wooden huts in the housing settlement were demolished, replaced by private housing. From the mid 1960s, the Riverwood Nursery School also looked to relocate. In August 1973 it was closed due to the unsatisfactory condition of the hut building, which was by now in a real state of disrepair.

‘On a happier note the children, completely oblivious to the conditions of the building, had an extremely happy year.’ Sydney Day Nursery and Nursery Schools Association Annual Report, 1972

After much lobbying, the Riverwood Nursery School Committee leased nearby land at the corner of Belmore Road and Roosevelt Avenue from the NSW Housing Commission for a ‘peppercorn’ (very small) rental.

More lobbying meant that a capital grant was approved by the Australian Government under the new Child Care Act 1972 for a brand new Riverwood Nursery School building.

Designed by Stafford Moor and Farrington architects, it was a large and modern space for 60 children, aged two to five years. The new Riverwood Nursery School building was completed at the end of 1974, and children attended from the start of 1975.

The new location revived the centre. A new Director, Mrs MacDonald, came from the Emma Elizabeth Dixson Day Nursery and Nursery School (now SDN Surry Hills). In December 1976, an Open Day was held where 60 visitors attended to see the centre and have a morning tea. The work of the centre continued to be of interest to other services, with visits by speech therapy students and social workers. 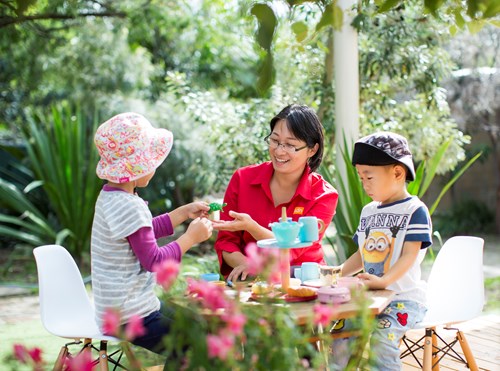 SDN Riverwood today
Since its beginnings, SDN Riverwood has undergone many changes, reflecting a strong connection with our families within a vibrant and diverse community.