SDN's spirit of unity through history

Looking back to the period of 'The Great Depression', we see how a strong sense of unity has led us to overcome similar challenges to those we are facing today.

“Yet in spite of, or rather because of unprecedented difficulties, the past twelve months have proved to be one of the most interesting periods in the history of the Association, for we are in a changing world, and where experience fails to guide, experiment is necessary in working towards a solution.”

This extract from SDN’s 1931 Annual Report sounds eerily familiar at the moment. Australia had entered the Great Depression, and its impact was being felt by SDN. The Report goes on to say:

“The year just closed has been one of adjustment, holding many problems for the Association, and the Executive Committee’s desire to place on record, with thankfulness and pride, their deep sense of gratitude for the understanding and co-operation shown by the branches and circles. It is this spirit of unity that has enabled the Association to meet efficiently the many, and sometimes, unforeseen, demands on the services of the Day Nurseries.”

1931 was, in many ways, a discouraging year for the Sydney Day Nurseries. The far-reaching distress of the Great Depression, an unravelling economy and growing unemployment hit our community hard. The number of children in some centres had steadily decreased in spite of reduced fees and concessions. The centres did their best to reduce the expenses of the nurseries, which sometimes included staff losses. It was a financially taxing time for the organisation. There was an initial steady increase in attendances at the newly opened Newtown Nursery in 1930, but these numbers soon fell, to the disappointment of all. 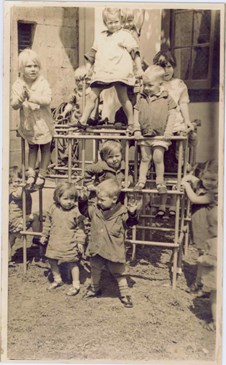 the above image is from 1932 Paddington Nursery.

In the 1932 Annual Report we meet Mrs Hamilton, who helped SDN take a visionary step forward:

“The Day Nursery Association had for some time been aware of (the) development of Nursery Schools (by now an extremely vigorous growth in Great Britain, Europe, and America), but felt itself unable to incur fresh expense on account of the financial stringency. At this point Mrs Hamilton, with high qualifications both in graduate and post-graduate school education, offered to organise and conduct in a voluntary capacity, a demonstration nursery school for some hours each morning, during her stay in Sydney. This offer was accepted with great gratitude, and Mrs Hamilton opened the first Nursery School in NSW at the Woolloomooloo Day Nursery in October.”

The Nursery School was for 2 to 5-year-olds and was revolutionary in incorporating an educational component into long daycare provided by qualified teaching staff. It was a pulling together of the previously disparate ‘care’ and ‘education’ elements of childcare. It also meant that SDN had to now take active steps towards training and appointing teachers to work in the Day Nurseries, a tenacious decision, given their financial circumstances.

“The success of her [Mrs Hamilton’s] method was so evident in the improvement and development of the children, that when the end of her visit to Sydney drew near, the committee felt they were amply justified in keeping the school open.” This was the birth of our Nursery School Training College.

We are all facing our own challenges in this current pandemic lockdown – but our staff and educators are also seeing this as an opportunity to experiment and develop programs to incorporate the new online world of learning. Watch this space!

Use my location
Talk to us